Since we have had 5 weeks in the Book of James, I had hoped to preach my three Sundays on James.  Then I looked at the text for today.  “Are any among you suffering? They should pray…. The prayer of faith will save the sick.”  On the one hand, that probably sounds like a preacher’s dream text.  For some it might be, but not this one.  After I looked at this text the first time I thought, you know the Old Testament reading is a good one, maybe I will go with that.  But then as is so often the case, it’s always the texts that I don’t really like that are the most important to preach.

What I found particularly irksome about this text is it seems overly simplistic.  And frankly, wrong.  We all know we are supposed to pray.  Hopefully most of us do pray.  But we also have experienced praying for someone who is sick and being disappointed when they did not get well.  They did not heal.  In some cases, they died.   So how can James say that the prayer of faith will save the sick?  Does that mean that anyone who isn’t healed doesn’t have someone truly faithful praying for them? Of course not.  This is one of the hardest things to reconcile as a Christian.   We are told to pray and so we do. Yet occasionally, even when we pray for something good and holy, perhaps even righteous, our prayers go unanswered.

Since it’s something I have never been able to reconcile, it seemed like something that I should probably avoid preaching about.  So I looked at that Old Testament text again, because it really is a great text. Moses is complaining to God about this ungrateful group of whiners he is stuck with.  This was not the first time the Hebrew people had complained.  Earlier in the story, they had complained about how hungry they were, so God provided them with manna from heaven.  Now they are sick of manna, they want some meat.  It’s kind of understandable.  I love bread, but not even I could eat just bread for 40 years.  So they are complaining again which leads Moses to complain to God about this ungrateful rabble.

God was not upset that they were asking for meat.  What really ticked him off was that they were reminiscing about Egypt, the place that God had freed them from.   Their deliverance from Egypt was an answered prayer.  They had prayed to God that God might free them from their enslavement in Egypt. God had gone to great trouble to free them from their oppressors.  God brought plagues upon Egypt.  God parted water so they could safely pass.  He sent them a leader in Moses, who they then abused.  And now, they want to go back.  This is the thanks God gets for their answered prayer?

As confounding as it is to us when God doesn’t answer a prayer in the way that we think is good and appropriate, it must also be confusing to God when we have our prayers answered and then end up complaining about it.  I am sure we can all think of a time when we prayed fervently for something and were granted that, but then later found ourselves complaining about the very thing we desperately wanted.

I think it all comes down to the way we treat prayer.  Do we perceive prayer as a tool to get what we want out of life?  Or is prayer a gift that God has given us, a gift that allows us to create and sustain a relationship with God and one another.  In the previous chapter, James wrote, “Draw near to God, and God will draw near to you” (4:8).  By speaking to God, we grow closer to God.  Because even when we are complaining to God, at least we are in dialogue with God.  Remember, it wasn’t the complaint about the lack of meat that irritated God, it was the desire to return to Egypt. It was the lack of gratitude for their answered prayer.

The other thing that James is emphasizing in this text is the need for a community of faith.   James wrote, “Are any among you sick? They should call for the elders of the church and have them pray over them, anointing them with oil in the name of the Lord. The prayer of faith will save the sick, and the Lord will raise them up; and anyone who has committed sins will be forgiven.”  James was encouraging people to reach out to those in their faith community to pray for them.

Remember, a lot of what James has been talking about in this book is the action of Christians—how to live a Christian life. Here he is explaining that one of the actions of a Christian is reaching out and asking for help.  Another is responding to that cry for help.  Prayer isn’t merely about our relationship with God, it’s also how we relate to one another.

One of the things that we had to stop because of COVID was the healing prayers we offered every Sunday.  It was usually a non ordained person providing prayer in the chapel.  People shared their need and one of our healers prayed over them.  Now, I never asked Jane or Laura or Linda how many people they really healed.  Because I think we all knew, that wasn’t exactly the point.  The point was that people felt the care and compassion of another Christian in the community, in the context of Sunday morning worship.  It was individual prayer enfolded in community of prayer.   I believe that is a perfect illustration for what James is talking about.

Of course the problem with this interpretation is that it still doesn’t explain what the text means when it says, “The prayer of faith will save the sick.” I wish I could tell you.  I really wish I could explain why so many good and worthy prayers go unanswered.  And I also can’t explain why we humans occasionally act like the Israelites complaining about a prayer that God answered that we now wish he hadn’t answered. What I do know is this, giving up on prayer never helped anyone.  I have never spoken to anyone who said, “Yeah, my life really turned around when I stopped praying.”  Because when you stop praying, you give up.  You isolate yourself not just from God, but from your brothers and sisters in Christ.

Now there might be times, when you simply  don’t have the strength.  That’s ok.  Don’t beat yourself up about not being able to pray at times.  That is where the clergy and the church come in.  Many people stop coming to church when they can’t pray because they think they are being insincere.  But please, please don’t do that.  Keep coming, so the community can hold you up.  Keep coming and if you can, ask for someone else to pray the prayer that is eluding you.  That is what we are here for.  Someone once said that a church isn’t a museum for the saints, it’s a hospital for the sinners.   As beautiful as this church is, I don’t want it to be a museum for super holy people to display their holiness. I hope it can be a place where wounded souls find healing and even the unanswered prayers find some solace. 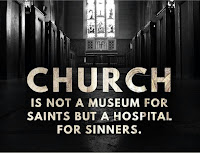