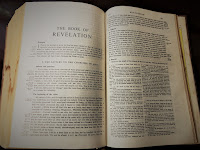 I can’t think of anyone who has ever told me that the Book of Revelation is their favorite book of the Bible.  Anyone?  If it is, that’s ok.  It just makes you unique. Despite the lack of popularity around the Book of Revelation, there are a few passages that bring incredible comfort to those who hear them, including the passage we heard today.  It might be familiar because we often use it at funerals.  In fact, all the readings from today are ones that are recommended for funerals. The part from Revelation that usually appeals to most people is: “God himself will be with them; he will wipe every tear from their eyes. Death will be no more; mourning and crying will be no more, for the first things have passed away.”  The part that speaks to most of us is the release from pain, the visual of God wiping the tears from the eyes of those who are suffering.  It moves me every time I hear it or read it.

If you read the rest of the Book of Revelation, you will see why this release from suffering is so important. There was a lot of pain and suffering before we get to chapter 21. There were beasts, lakes of fire, dragons, Satan, huge storms, rivers of blood… plagues.  We think the last year and a half has been bad….imagine 1,000 years of this–plus dragons and rivers of blood.  Then again, it kind of feels like 1,000 years, doesn’t it?  5 million people have died from Coronavirus alone.  That doesn’t even include all the other ways that people have suffered and died.  This might be the perfect time for us to dwell a little on the Book of Revelation.  If we don’t take it too literally (which I don’t think was ever intended) then maybe we can identify with this book, now, more than ever.

While the visual of God wiping the tears from our eyes and the end of death and mourning is powerful and comforting, there are other parts of this reading that not only comfort, but inspire.  The writer talks about a new heaven and new earth. It begins with, “Then I saw a new heaven and a new earth, for the first heaven and the first earth have passed away, and the sea was no more.”  Usually when we talk about the world ending, it’s threatening and scary.  But this part of the Book of Revelation gives hope because it allows for this new heaven and new earth, this opportunity to make all things new.

It’s strange that the writer specified that the sea is no more.  Why even mention that?  Can’t we assume if the old earth is passing away, the sea is included? In Biblical times, the sea represented division. It was what separated people from one another.  It represented a barrier to human relationships.  For God, it isn’t enough to create an entirely new heaven and earth, God wants to ensure that relationships will be renewed as well. There will be no division between red and blue, Christians and Muslims, conservatives and liberals, vegetarians and bacon lovers.  The barriers will be removed and we will once again live as God intended.

Much of this might seem irrelevant to us today.  If this is about the end times, why are we talking about it now? The Episcopal Church doesn’t talk about the end times.  But what if this is about more than the end? What if we were able to translate this vision of the future to our present?  For the first few months of the pandemic, we talked about going back to normal.  Then we realized that probably wasn’t going to happen, so we talked about the new normal.  But no one really knows what that means, and let’s face, it doesn’t sound that appealing.  Because when we say “new normal” we just focus on things we need to change, not by choice but by necessity.  We all know that change is hard and disruptive. Why in the world would be want to go through that disruption to achieve normality? Normality was never that good in the first place.

When the author of Revelation wrote, “See, I am making all things new.”—it wasn’t a threat.  It was a promise.  Because once you have been through lakes of fire, rivers of blood, dragons, beasts, and plagues, “new” sounds pretty good. Instead of worrying about what will have to change or what we can change back, perhaps we can focus on how to make things news.  If what we read in this text of the Book of Revelation is a vision for this perfect future, there must be a way to bring parts of that perfect future to our present world.  I can think of one way: let’s get rid of the seas that divides us. We have planes now and cell phones.  We can overcome the sear.  The only thing that actually divides us is our pride.  Enough of the divisions.  Enough of the fear mongering. Don’t we have enough anxiety without stoking the flames of unnecessary fear?  Normal. We don’t need to go back to normal. We need to go back to God.  Return to God. Make all things new.