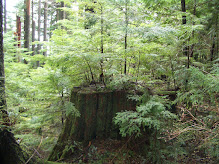 I am horrible with plants. I love them and I am always trying to grow them, but it just never seems to work out for me.  Therefore, bringing a dead plant back to life seems almost unfathomable.  However, after reading this text from Isaiah about 10 times, I started to wonder if a dead stump could actually sprout. The text says, “A shoot shall come out of the stump of Jesse, and a branch shall grow out of his roots.”  According to my extensive research on two different gardening websites, it’s possible. Apparently, you can grow a brand new tree out of an old stump.

Who is this Jesse and why does he have a stump? Jesse was the father of King David.  This stump represented the dynastic line of David.  Clearly things weren’t going particularly well for the House of David when Isaiah prophesized.  A stump doesn’t exactly project strength and vitality.  Israel had been ransacked by multiple enemies by the time the Book of Isaiah was written. The people were exiled, the kingdoms fell. They had a few good and righteous kings after King David, but the line was almost unidentifiable 500 years after King David reigned.  Since our country is less than 300 years old and created without a king, it’s hard to imagine a 500 year dynasty.  Seem like a pretty good run to me.

But this dynasty was about more than just leadership.  To some extent, it was about salvation.  It was about God’s commitment to Israel.  The people of Israel were supposed to be God’s chosen people and David was the chosen king.  When all they had was a stump, there was despair.   Yet what today’s text tells us is that this stump still held life within it.  Perhaps that is not the best description.  The stump wasn’t alive as much as it was receptive to the spirit that washed over it. The spirit gave that stump life. It changed everything.

The first part of our reading is about the transition from despair to hope.  It speaks of a new leader who will be righteous and just.  This leader will receive God’s wisdom, the spirit of knowledge and the fear of the Lord. “Righteousness shall be the belt around his waist, and faithfulness the belt around his loins.”  Of course one of the reasons that we read this in Advent is that Christians believe this is all pointing to Jesus.  And one cannot deny that Jesus was righteous and faithful.  I am not sure that he was the leader people were really hoping for as he ended up betrayed by many of his followers and crucified.  He was not the leader people imagined, but he was the leader people needed.

The 2nd half of the reading paints a picture of utopia.  It’s actually a kind of ridiculous image.   I can imagine a cow and a bear hanging out, but a child playing with a poisonous snake seems a little crazy.  Of all the creatures to play with, why a snake?  As you can tell, I am not a fan of snakes.  Of course if you think too much about the image, it loses its appeal.  The point is that this new world has no natural enemies.  Forget about the enemies we create.  There are no enemies at all. The whole natural order is thrown out in this new world.

Now part of me wants to say, this image is too unrealistic.  Look at the state of our world right now.  We’ve had 4 mass killings in the last month—and that’s just our country.  This idea of a world with no conflict is beyond our hopes and dreams.  Yet perhaps we have been trained to dream too little.  In our need for realism and attainable goals, we have lost sight of a God who wants us to see something we can barely imagine.  Unfortunately we lose that ability to dream as we age.  We forget what it is to imagine.  This place where there are no conflicts and only harmony is God’s dream for our world.  It’s God’s dream for us.  God wants our dreams to go beyond what we can see.  Isaiah’s vision isn’t a goal to be achieved.  It’s a dream by which we set our course.[1]  One of my favorite prayers is sometimes also used as a blessing. It reads, “Disturb us, Lord, when we are too pleased with ourselves, when our dreams have come true because we have dreamed too little…”  I wonder in our desire for attainable goals and benchmarks, we have lost the ability to see what God so desperately wants us to see.

Our Gospel reading was brought alive by that powerful depiction of John the Baptist.  John the Baptist is a typical prophet in many ways.  He was delivering hard truths to people who did not want to hear it.  John appears in all the gospels, but it’s only in this gospel when he specifically calls out the Pharisees and Sadducees, the people who were far too comfortable in their lives and confident because of their religious pedigree.

I think what was really frustrating John the Baptist wasn’t that the Pharisees were wrong or even immoral.  It was that they had become too complacent.  They were ok with the system as it was because it was benefiting them.  I think it’s fair to say that most of have become a little too comfortable in our lives. There are times, like in the pandemic when changes come that we can’t control and we are forced to change how we live.  That definitely shook a lot of us out of our complacency. But most of the time, we just move through our days quite contentedly.  This isn’t to say that things are smooth sailing or we never have bad things happen to us.  But all in all, we don’t want someone coming in here and telling us that everything has to change, that we have to change.

Like Isaiah, John was also trying to paint a picture of a new kind of leader.  He wasn’t presenting some utopian future.  In fact, the way he describes Jesus sounds a little scary. But he knew this leader would be led by the Spirit and would change people— change the world.  John clearly still had the ability to dream and imagine.  He knew that whatever was going at that time wasn’t right. Too many people were suffering.  So he dreamed of another world.  I think it’s why he dragged people into the wilderness.  He wanted them to get away from their everyday lives, force them to see things from a different perspective.

As we age, it’s hard to keep dreaming, but there are moments when the blinders slide a little and we dream again.  Often it’s when we are with babies and children.  Children allow us to hope like we once did. They make us see new possibilities.  They also challenge us to make changes.  I never cared as much about the environment as I did after I became a mother.  Because the more I imagined his future, the more I realized that he was going to be on this earth a lot longer than me and the things I do now can have a major effect on him in 50 years. Children can remind us that there is a future worth fighting for, a future that can and should be better than what we have now.

So it is fitting that we have a baptism today.  Because baptism reminds us not only of the wonder and innocence of babies and children, but also about the renewal that is available to us all. That is why we do the baptismal covenant.  We want to remember who we can be as children of God.

I want to give you all some homework. I want you to take some time to daydream, to remember what you hoped for as a child and also try to consider what you truly hope for now.  What is God’s dream for you?  Don’t be realistic. Don’t be reasonable.  Don’t try to create a smart goal.  Be like Isaiah.  Be like John.  Just open yourself to God’s dream and then take one step, any step, in the direction of that dream.  If an old stump can grow a new tree…if Jesus Christ can rise from the dead, then surely we can remember how to dream again.