A couple of years ago I purchased an audio version of the entire Bible.  I thought that it would give me something peaceful and calming to listen to at the end of the day, perhaps before sleep.  When I came to the Book of Judges, I had to skip major chunks.  There was so much war and violence.  It was neither calming nor soothing.  Therefore, it will probably not surprise you that I have never preached on this book.   In my defense, this is the only time we have a reading from Judges in our 3 year lectionary cycle.  It’s also short, has complicated names, and makes no sense if you only read only the part that we heard today.
Instead of skipping it entirely, I am going to provide a little context. The Book of Judges picks up where the Book of Joshua ends.  Moses had appointed Joshua to be his successor and Joshua had ruled the Hebrew people successfully for decades.  As you can imagine, following leaders like Moses and Joshua would be quite an undertaking.  When Moses died, he appointed Joshua to be his successor.  Joshua did not appoint a successor.  This lack of leadership was difficult for the people of Israel.  The first line of our reading is: “The Israelites again did what was evil in the sight of the Lord…”  Again.
The Israelites had a pattern in how they related to God.  Take yourself back to high school or college for a minute. You remember the couple.  They would be in love, then there would be a fight and they would break up. Then one person would decide that they could not live without the other. They would get back together and be happy for a time.  Then things would get difficult and they would break up again.  This is a loose analogy for what happened with the Israelites and God.  However, in this case, there was always one party who was at fault, and it was not God.
We do not know why God didn’t appoint a leader after Joshua died.  It would be many years before David would become King.  In the interim, there were leaders called judges.  These judges were primarily military leaders who helped Israel defend itself from various enemies.  There would be peace and a good judge.  Then the judge would die and there would be chaos. The people would turn to other gods.  They would then be attacked by an army and realize that they could not survive without the one true God.  They would beg God to deliver them and God would send another judge.  Then the process would start all over again.
When we get to the point in today’s story the Israelites are in trouble again. They have been controlled by the Canaanites for 20 years.  They wanted to overthrow their oppressors, but they could only do so with God on their side.   The Canaanite army was led by a man named Sisera and had 900 chariots of iron.  When we hear chariots, we don’t think of something scary and deadly.  However, at the time, iron chariots were the top of the line military equipment. It would be like trying to fight 900 tanks with people armed with pistols…not a fair fight.
The judge who led the Israelites in this epic battle was an unexpected leader. She was a judge named Deborah.  As far as we know, Deborah was the only female judge living in a time when women had no authority.  She did.  What made her a strong leader was that she knew that her authority came from God.  She was also a good delegator.  She went to a man named Barak and told him that he would lead the army to defeat the Canaanites.
This is where our reading for today ends, but this is also where it gets more interesting.  Barak told Deborah that he would only go if she came with him. This is almost unbelievable—a man of that time telling a woman that he would only go into battle with her at his side.  Her response was: “I will surely go with you; nevertheless, the road on which you are going will not lead to your glory, for the Lord will sell Sisera into the hand of a woman.”  In other words, sure, I will come, but you are not getting any glory because God is giving the glory to a woman instead.  When we read this, we assume that it is Deborah who will receive the glory, which does not make her look very humble.  It isn’t.  God had another plan.  The Israelites fought hard and won great battles sending the general, Sisera, into hiding with an ally, the King of Hazor.  Sisera thought he was safe, but he wasn’t.  While he was sleeping the wife of the king killed him with a tent stake and then found Barak and showed him where the body was, which meant the Israeli people were victorious. 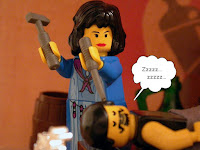 While this makes for a scintillating narrative, it is challenging to preach.  It is hard to find the good news in a story where there is so much violence.  Therefore, we have to look past the violence and focus on the people.  In Book of Judges and most of the Bible, we have a community of fickle people who continually turn away from God.  We might be able to identify with people who have trouble following God.  I know I can.  What we also have, are unlikely heroes.  We have a woman who should never have had the authority she had, not according to the norms of that time and place.  We have Barak, a man who refused to go to battle without the support of a woman. Then we have the wife of a King who wasn’t even an Israelite who showed great courage and cunning.  She should have had no part in this fight.  What those leaders had in common was humility and faith. They knew that they were instruments of God’s will.   They knew what so many have chosen to forget, that we owe everything we have to God.  There is no battle that we can win without the help of God.

One of our Eucharistic prayers  (which is what the priest reads before we all take communion) says: You made us the rulers of creation. But we turned against you, and betrayed your trust; and we turned against one another. As Christians, it is important to acknowledge that we too have had those moments when we have turned away from God. Sometimes we know that we are doing it. Sometimes we don’t because we can’t see past our own self-interest.  But then when we need God, we come back to him and he always takes us back.
The story of the Jewish and the Christian community is complicated and beautiful.  It is full of twists and turns.  It is full of moments of betrayal and moments of desperation.  But what makes our story compelling, what makes our story one that does not end with the words of the Bible, is the unexpected heroes that permeate our faith stories.  Yes, we need to admit our sins and our moments when we turn away from God and one another.  I hope that we can also see those opportunities when we can be the unexpected heroes, the instruments of God’s love, grace and authority. The Christian story is unfinished. It is up to each one of us to decide what role we have in the story.   We do not have to be great warriors to be the heroes of this story.  We just have to be commit ourselves to following the will of God wherever it may lead us.