One of the things I was able to do on my sabbatical was sit in the pew with my 5 year old son.   He had lots of questions.  On the one hand, I welcomed the questions because they were relevant and it was a way for him to engage in the service.  On the other hand, I didn’t want it to be disruptive.  One question that came up fairly often occurred during the Eucharistic Prayer when the priest held up the wine and said, “Drink this all of you, this is my blood of the new Covenant.”

“That’s Jesus’ blood? Are we drinking Jesus’ blood?”  Now this was not the first time someone has asked me this.  Especially growing up Roman Catholic, I would get that question a fair amount.  But this was the first time I attempted to explain it to a 5 year old.  The typical Episcopal answer would be, “Well it’s a mystery.  We know God is present, but we don’t know how.” I knew this answer would not go over well.  So I just said, “No—-but it helps us remember Jesus.”  Now, this was hard for me, because the answer is so much more complex (and would probably be deemed heresy by many, but this was the best I could do for someone who takes everything literally.

I know that you all have been hearing about the bread of life for several weeks now.  It would be easy to assume that today’s Gospel reading is just a repeat of the past readings. It certainly has elements of previous verses, but it’s different.  In the verses for today Jesus got a lot more literal and the people listening were not pleased about it.

Talking about “flesh and blood” might seem unusual in today’s context (that is if we were not celebrating communion.)  However, it was probably not that jarring for Jesus’ original audience.  That phrase is a Hebrew idiom that refers to the whole person (hearts, minds, hopes, dreams, everything.)  Therefore it wasn’t that strange for Jesus to be talking about flesh and blood.  But where Jesus got into hot water was when he referred to his blood and his body. Once he had their attention, he got even more specific: “Very truly, I tell you, unless you eat the flesh of the Son of Man and drink his blood, you have no life in you.”  You know Jesus is serious, when he starts with, “Very truly.” Which makes his reference to his flesh and his blood that much more alarming and gory.

Of course many theologians and biblical scholars have used these words from John to debate the theology of the Eucharist, but few people can agree on the meaning. Consequently different denominations define communion in different ways.  Over the centuries, we have let our perspective on the Eucharist tear us apart.  I understand this to an extent, because it’s critical to our faith.  But it’s heart breaking to me that a sacrament that is supposed to bring us together is the one that has also torn us apart.

Augustine of Hippo was one of the greatest theologians of all time. He lived in the 5thcentury, 1000 years before there was a split between Roman Catholics and Protestants.  That means both Catholics and Protestants get to claim him as their own. I can resolve that argument right now because he was obviously an Episcopalian.  In all seriousness, it’s a sad irony that different sides fight over him to support their denominational views because for Augustine, the most important thing about the Eucharist is the unity that represents and the unity it can and should bring to humanity.

In the Episcopal Church we attempt to show that in our liturgy when we gather together around the altar and drink from one cup. Unfortunately, we have not been able to do that in a year and a half.  Some people worry that has negatively affected the celebration of communion. And so even those in our one small denomination have begun to debate the Eucharist with more fervor. 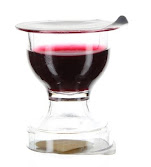 We never completely stopped debating it, but we found other things to argue about.  However, discussions about the Eucharist have become prominent again because of the pandemic.  When we could not have communion, some people got creative and attempted to consecrate over the internet.  Then people like us started providing Eucharist “to go.”  Both of these methods were criticized by some. Then once we could have communion, everyone split on how to distribute it.  I was totally against using these cup/wafer combinations.  I got over that because it turned out to be the best option for our church.   Other churches chose other options. Most churches still don’t have wine.  Some are using fancy tweezers to dip the bread in the wine and then place it on people’s tongues. It’s anarchy out there.

Yet, even I, raised in the Roman Catholic Church and rather passionate about communion, found that compromise didn’t have to mean we were diluting the sacrament.  At some point I realized that it wasn’t the presentation that was the most important thing.  The most important thing was the sacrament itself, the way it can transform us from the inside, the way it can transform our community. Augustine wrote, “Take and eat the body of Christ… Lest there be division among you, eat of what binds you together.”

I think it’s essential to celebrate diversity and what makes us unique.  It would be wrong for us to pretend that we are all the same or that we agree on everything, or even most things.  However, let us never forget that what binds us together is constant. What divides us is temporary. Why do we spend so much time arguing about temporal things?

No matter how we distribute or receive communion, we believe God’s presence is there, tangibly. It’s a gift that Jesus gave us and a gift that will never run out.  In a time when change seems like our only constant, my prayer for all of us is that we can cling to that which doesn’t change.  That is God’s presence with us in the sacraments of the church- God’s incredible display of love and compassion he displayed in sending his son to earth. Cling to that.  Hold on to it with all you are and all you have.  The rest will pass.  God’s love for us—God’s desire that we are unified in that love—that will last forever.