We are going to try something right now that we don’t usually do in the Episcopal Church.  It’s called “call and response.”  I am going to say, “God is good” and you will respond “all the time.”  Let’s give it a try.  “God is good.” “All the time.”   I have been in faith communities when they have done this—never in an Episcopal Church of course… And when I hear it, I feel a couple of things.  For a moment, I get swept up in the optimism, the sheer joy.  But then a moment later, I think, “But is he?”  Many of us can think of times in our lives when things seemed so unfair, so desperately sad, we wondered, why is God doing this to me?  Why isn’t God showering me with the goodness I deserve?

And if you have thought this, that’s ok. The Psalms are full of questions like this.  In the Old Testament, we see a number of examples of when God seems a lot more like an irritable human than a good and loving God.  For instance, was God good when he told Moses to leave him alone so his wrath could burn hot against the people and he could consume them?  He even offered to start a new nation with Moses as the father (rather than Abraham).  That means he was going to destroy the whole group, even though he promised after the flood he would never do that again. 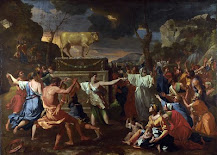 I will admit that God had some good reasons to be angry.  He was probably expecting that the people would be a little more grateful.  After all, God had brought the people out of Egypt, where they had been slaves.  He had shown them miraculous displays of power and mercy.  God had then given them 10 commandments to follow.  The first commandment was to not to create any idols.  Yet when Moses was delayed coming down from the mountain—where he was talking to God, the people began to panic and asked Aaron (Moses’ brother) to make gods for them.  Aaron complied.

Now, in defense of the people, being lost in the desert is no small thing.  People die when they are lost in the desert. When your fearless leader disappears on a mountain, that would be fairly anxiety provoking.  So they turned to what they had known for so long…worshipping the most convenient and most accessible gods.  Unfortunately for them, there is nothing that makes God angrier in the Old Testament, than worshipping other gods.

God’s reaction is completely understandable to us humans.  We have all lost our temper at times.  But shouldn’t God be above such hair trigger anger?  Fortunately Moses is able to reason with God and this is where things get even more interesting.  Despite the fact that God is determined to punish his people, he is swayed by Moses’ arguments.  Moses reminds him of the promise he made to Abraham.  He basically says, “Remember Abraham? Do you remember how you told him that his descendants would be like the stars of the heaven?  Remember Abraham God?  He was a good guy.  Those are his descendants you are about to destroy.”  God changed his mind.

This part of the story disturbs some people and I admit that it always makes me a little uncomfortable.  Most of us assume that God doesn’t change.  If God is all knowing and all powerful, he should not change.   Why would he? But when we talk about an unchanging God, we are really talking about God’s character that doesn’t change.  In the end, God is always good.  God is always merciful.  The fact that God was able to change his mind is further proof of his wisdom and goodness.

If you look at our Gospel reading, you will see God’s character on full display, without any anger to cloud the true nature of his character.  Both parables tell a story of reckless love, compassion and devotion. In the first, Jesus tells the story of a shepherd who searches for the one lost sheep, leaving the other 99 to wander in the wilderness.  The other story is of a woman searching her entire house for a lost coin.  In both stories, the searcher rejoices upon finding the lost item.  The shepherd and woman don’t simply rejoice on their own, no they call their friends and family to rejoice with them.  Jesus then tells those who are listening that there will be more joy in heaven over one sinner who repents than 99 righteous.  In these stories, we see God as patient, determined and merciful.  We see a God who is good, all the time.

One of the reasons I have a hard time with that phrase, is that I think about how I would feel if someone said that to me at a difficult time in my life.  I imagine someone walking into the ICU and saying, “God is good” and expecting me to respond, “All the time!”  I consider all the times I have counseled someone going through a difficult time and imagine myself saying that—saying “God is good” and expecting the weeping person to respond: “All the time.” It would not go over well.

Yet what I realized is that those aren’t examples of God not being good, those are times when life wasn’t good.  There is a big difference.  It’s tempting to blame God in times when life is difficult or unfair, but it’s important that we remember just because our circumstances have changed, doesn’t mean God’s character has changed.  It doesn’t mean God’s love for us has changed. God is bigger than what is happening in our world right now.  God is definitely bigger than what is happening in our individual lives right now.

But here is what is astonishing about out God.  Just because God is bigger than our problems doesn’t mean that God is too big or too important to care.  In both our Old Testament reading and our Gospel, we hear of a God who cares deeply for his people, and not just the group, but every single person.  There is a moment in all our lives, perhaps many moments, when we are lost, even the most righteous of us.  God will not give up until each one of his people is found.  God will not give up on any of us until we are found, perhaps found many times. Not only that, but God will rejoice in those moments as well.  God will gather his angels in heaven and throw a party. That’s not just a good God. That is a great God.