Deli meat, fish, soft cheeses, unpasteurized milk, caffeine and alcohol.   These are some of the things that pregnant women are supposed to avoid eating. Of course, there are also the daily pre-natal vitamins. It’s best to avoid stress.   Generally traveling in the last few weeks of your pregnancy is discouraged.
While Mary probably avoided deli meat and caffeine, she did not avoid stress or travelling.  The journey from Nazareth to Bethlehem was 90 miles, much of it over hills.  Mary and Joseph travelled by foot and donkey.  It probably took them over a week to make that trip.  At that time of year it would have been 30 degrees during the day and colder at night.  They slept on the ground.  They lived on bread and water, because that was all they could easily carry.  It was a perilous journey for anyone, but especially a woman about to give birth.  When they arrived at their destination, the best place they could find was a stable.   This wasn’t a sterile environment, not the cleanest place to give birth.
It makes me wonder a little about God’s judgment.  There are lots of ways he could have sent his son to earth to bring his message of love and salvation.  He could have sent him fully grown.  He could have sent him to a family with money and power. He could have waited a couple thousand years and sent him to a developed country where the baby Jesus would have been much safer. It’s baffling to me that God would take that kind of risk, that he would take a chance on this young powerless couple.  I personally think that all children should be wrapped in bubble wrap to ensure their safety. There was no bubble wrap! There was hay in a feeding trough.
God had already tried many ways to reach God’s people.  He sent the prophets who shared his words and wisdom.  Some of them displayed acts of power.  He sent a great flood so the world could start fresh.  He spoke through kings and warriors.  While some of the words of the prophets and kings got people’s attention, it never made the lasting impact that was intended.
It seems that God then took a break.  There is about a 500 year gap between the end of the Old Testament and the birth of Jesus.  500 years where it seems that God wasn’t communicating much, at least not in the big ways he had before.
We can’t know what was going on with God in those 500 years.  But I like to think that he was pondering, maybe even convincing himself of what had to come next.  He realized that he had to take a risk, make himself—God—vulnerable like he never had before.
Because God never does anything half way, he made himself as vulnerable as possible. He came not just as a baby, but as a fetus in the womb of a young woman who had no husband and no way to support herself.   There is no greater vulnerability.  For 9 months and then at least a year after, Jesus (God incarnate) depended on Mary for his sustenance.  God’s life was dependent on this one woman.  The future of humanity in the hands of one young woman.
Surely, God was still watching and protecting Mary and the baby Jesus.  One of the first things that the Angel Gabriel told Mary was, “The Lord is with you.”  The angel promised that through this all, God would be with her….not only in the literal sense as she was carrying the Son of God, but also that God the Father was providing strength and assurance.
As Christians, we talk a lot about trusting God and what that means.  It’s challenging to trust God, perhaps one of the greatest challenges that we as Christians face. What we sometimes forget is that God trusts us as well. He displayed that by allowing his son to come to earth in the form of a baby, a helpless baby.  One of the things that distinguished Jesus from other religious leaders, and certainly from anyone considered a god, was that he never asked people to do anything that he was not willing to do.
We as Christians, put our lives in his hands.  Technically we do.  Let’s face it, it’s usually more figurative than literal. We put our future life in God’s hands in that we believe that if we follow God in this world, then we will live eternally. It’s a lot harder to put our day to day needs and concerns in the hands of God.  Jesus put his life in our hands.  He was completely dependent on human parents to provide for his needs.  He did not come out of the womb as a fully grown man; he was a tiny baby. 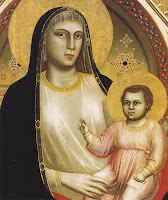 If you look at Medieval art, the baby Jesus always looks kind of weird.  He usually has the face of a man, or maybe even the body of a man, but miniature. Obviously medieval painters knew what babies looked like.  But they could not imagine God in the flesh in that helpless state.  While we have gotten better at depicting baby Jesus in art, I am not sure we truly appreciate the kind of trust and love that God showed in sending his only son to earth.  How could we?
We have romanticized the story of Jesus’ birth and painted it in gentle and vibrant hues.  We have made it sweet and sentimental.  But if you look at the facts of the story, it was a very strange way to introduce God to this world. The crazy thing is, that it worked.  Because God wasn’t just telling people what to believe, he was showing them how he loved us.  For millennia, God had amazed and terrified people with his awesome power.  But with Jesus, people learned what it was to know God and be known by God.
You might think, well that is all fine and good, but that was thousands of years ago. What do we do when we don’t have God in the flesh here with us? How can we learn to trust and love a God who we don’t know? That’s a tough one.  The best way to trust God is to enter into a relationship with God.  We can do this by reading the Bible, which is full of stories like the one we heard tonight.  We can embrace the traditions of the church, many of which are 100s, maybe even 1000 years old.  We have the Christian religion and the Episcopal Church, that while imperfect, have done a great deal of good in the world.  We have community worship, an opportunity to come and sit with a community of believers and worship God through music and prayers.  We have prayer and meditation.   Some people think that these are the things we do after we learn to trust God.  That certainly is true.  But these are also the practices we use to get to know God.
People sometimes worry about coming to church when their faith is on perilous ground, or because they are doubting or perhaps even teetering on the cusp of disbelief.  This is exactly where we belong when we are in those situations.  Someone once said that the church is not a museum for saints, it is a hospital for the broken sinners.  I am convinced, that in a room full of broken people, we can find wholeness. We can create a mosaic of faith and trust.  It will not be perfect, but no relationship ever is.  The story of Jesus’ birth and life, is messy and disjointed. That is what makes it real.
Jesus’ life on earth began with a 90 mile journey in the womb of a young woman.  This 90 mile journey was just the beginning of a wonderful, but difficult life; a life where Jesus loved and was loved, a life where trust was created and trust was broken.   As a result, God understands our journey.  While we are not carrying the baby Jesus in our womb (if you are, we need to talk), we are carrying a promise, a promise of God’s love, a promise that God will be with us now and until the end.

(Quote from Abigail Van Buren.  It is assumed that she was quoting St. Augustine.)