When I was in 10th grade, I decided to take on a new discipline for Lent. My plan was to go out of my way to show kindness to someone who I felt had wronged me.  This started as a genuine attempt to follow Jesus’ and Paul’s words regarding love for our enemy.  But here is where I went wrong, I told a number of people what I was doing.  So everyone knew that the person who I made cookies for was someone who had really ticked me off.  And it went as far as to make the recipient of my kindness a little paranoid.  I will be honest with you, at the time, it was extraordinarily gratifying.  I was doing the Christian thing while also delivering a clear rebuke to my enemy.  In the back of my head, I had some doubts that what I was doing was the Christian thing because I was pretty sure (even at the age of 15) that loving my enemy wasn’t supposed to feel this good.  That knowledge did not change my actions.  Now, I know I was doing exactly the opposite of what the apostle Paul was telling people.  He wrote, “Let love be genuine…”  There was nothing genuine about that display of love.

But in my defense…what makes love genuine anyways? I mean, that can be hard to decipher. Well, not really…not if you actually read the rest of this chapter from Romans.  There is lot of explanation in these 11 verses.  I could preach a sermon for every verse, but I am only going to reference the ones that help define genuine love.  “Rejoice with those who rejoice, weep with those who weep. Live in harmony with one another; do not be haughty, but associate with the lowly; do not claim to be wiser than you are.”  Those first few exhortations seem like they should be easy.  Rejoice with those who rejoice.  That’s easy if it’s a birthday or an anniversary.  But what if someone is rejoicing over a new job, a job that you wanted…or a promotion, a promotion you will never receive. Or…the election of a candidate you don’t support. The same year (in 10th grade) when I had that Lenten practice, I wore black for a week when the candidate I supported didn’t win. I was that mad and I wanted everyone to know it.  Therefore, I am well aware of how hard it can be to rejoice when you don’t feel like rejoicing.

That brings me to the next part of genuine love—humility.  “Do not claim to be wiser than you are.”  Have you ever noticed that the truly wise people are those with the most humility, the people most willing to admit that they’ve been wrong a lot and probably will be wrong more in the future? They are not the overly confident know it alls.  They are the people willing to listen.  And man is that hard in an election year when so many of us know exactly how right we are, and how clearly wrong the opposition is.  If we can love people, even when we disagree with them fiercely, then we know we have found genuine love.  And I don’t mean the kind of love where we say, “I love them but I can’t stand to be in their presence right now.”  Nope.  I am pretty sure that doesn’t count.

Now, it’s ok if you aren’t there right now.  Paul never said this was easy. You might need to take baby steps toward that genuine love. You might even have to say, I might not get there in this election cycle.  But there is a clear beginning in the path toward humility—that is to admit that we don’t know as much as God.  Start there. It seems obvious, but I think we forget that a lot.

“Do not repay evil with evil.”  This is tricky, because so far we have been talking about how to genuinely love people who we already love or have some affection for.  But this is Paul assuming that we are not just talking about people we already have a good relationship with, but people who we don’t even like…people who may not necessarily be evil, but do evil things.  Paul is saying that if our love for God is genuine, then we won’t respond to evil with more evil.     That almost seems like we are being asked too much—few people can be that selfless.  Yet a few verses later, Paul returns to this idea. He closes with, “Do not be overcome by evil, but overcome evil with good.”  When we respond to evil with more evil, we are not merely hurting the other person, we are hurting ourselves. Someone once said that “Resentment is like swallowing poison and waiting for the other person to die.”  We could say the same of repaying evil with more evil.   If we are repaying evil, it means that we are carrying it around in our soul, and that is a dangerous place for evil to reside.

There is a specific line in this reading that is rather confusing.  Paul writes, “if your enemies are hungry, feed them; if they are thirsty, give them something to drink; for by doing this you will heap burning coals on their heads.”  When I first read this, I thought this was Paul’s humanity coming out a little—that he was saying, “If you show goodness, don’t worry, your enemies will get what is coming to them.”  But that interpretation probably said more about me than Paul.  One commentator suggested that a better interpretation is that genuine love and action has the potential to bring about repentance in your enemy.  Repentance is often associated with the refiner’s fire.  It is not a fire that burns to punish.  It burns to purify.   Good deeds, genuine love—can burn away the heat of the enemy.[1] 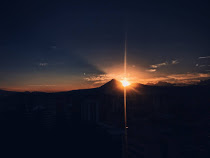 Paul was particularly sensitive to the need to love the enemy, love those who persecute you, because he had been a persecutor of Christians. He had been the enemy.  Then God showed him love and Christians gave him the chance that he didn’t deserve.  He was redeemed as a result of that love.  While I don’t think any of us persecuted Christians like Paul did, most of us have embodied the enemy at one point in our lives.  But the amazing thing about our faith and God’s love for us is that we never stay the enemy for long.  Redemption is as close to us as the words in our mouth are to our heart.  Let love be genuine, because that that is the love that will not merely hold the darkness at bay, it will defeat the darkness.

Photo by Mel Elías on Unsplash