Don’t make me come down there: Dec. 3

Have any of you seen the billboards on the side of the highway with messages from God?  They have a black background and white letters.  They say things like: 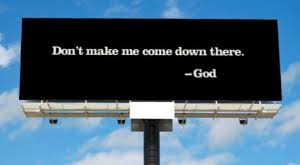 “That ‘love thy neighbor thing’—I meant it.”

Or “My way is the highway.”
Or, one of my favorites: “I don’t question your existence.”

Holding in-person services at 9 & 11 am. Watch our 11 am service on YouTube