Dietrich Bonhoeffer had a very promising career in academia and the church.  He received his doctorate at age 21 and began teaching at the University of Berlin at 25.  He was also an ordained Lutheran Pastor. Two years after his ordination, in 1933, Hitler seized control of Germany.  Bonhoeffer could have gone the way of the majority of the Protestant Pastors in Germany and sworn allegiance to Hitler while covering the cross with a swastika, which was not uncommon at that time.  Instead, he created the anti-Nazi Confessing Church.  He also started an independent seminary for the Confessing Church.  During that time, he wrote The Cost of Discipleship which remains on many seminary’s curriculum to this day.  While the seminary met in secret, it was discovered and closed after only two years. 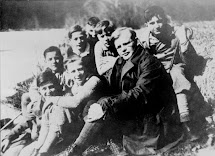 It was soon after that when violence against the Jews became publicly sanctioned and people like Bonhoeffer realized that it was only going to become worse.  He joined a resistance group which was made up of political, military and religious leaders.  One of their accomplishments was providing for the safe escape of seven German Jews to Switzerland.  Unfortunately, that was also the last piece of evidence needed for the SS Guards to arrest Dietrich Bonhoeffer.  He was 36 years old when he was arrested and newly engaged to woman named Maria.

Jesus was known to use a fairly common oratory tactic, that of the hyperbole, exaggeration.  I like to remind people of that whenever they mock me for my tendency to exaggerate, as it is God ordained.  Today’s Gospel reading is a good example of this tactic.  “Whoever comes to me and does not hate father and mother, wife and children, brothers and sisters, yes, and even life itself, cannot be my disciple.”  This is a little extreme even for Jesus.  Hate, as we often like to say, is a strong word.

The word that is translated to hate was a fairly common Hebrew* expression meaning “to turn away from, to detach oneself from….”  The text would then read, “Whoever comes to me and does not turn away from father and mother, wife and children, brothers and sisters, and even life itself, cannot be my disciple.”  While this is a little more palatable, it’s still pretty uncomfortable.  I am pretty sure you are never going find that on a book mark or magnet in a Christian Bookstore.

One of the reasons that people struggle with this text is because it contradicts so much of what we consider Christian family values.  However, the Bible sends us mixed messages about family.  One of the 10 Commandments commands us to honor our mother and father.  But there are also horrific examples of violence against family. The first murder in the Bible is a man killing his brother.  Abraham, one of the great patriarchs of our faith was ready to kill his only son.  There are countless other examples of violence within families in the Old Testament.  While the New Testament lacks much of the violence we see in the Old Testament, it still has some mixed messages on how we consider families.

The only stroy we know about Jesus as a child is when he leaves his parents so he can worship in the synagogue, never considering how his absence might affect them.  There is a story in Matthew where Jesus appears to ignore his family.  Jesus was addressing the crowd and someone told him, “Look, your mother and your brothers are standing outside, wanting to speak to you…” Jesus replied, “Who is my mother, and who are my brothers?” And pointing to his disciples, he said, “Here are my mother and my brothers! For whoever does the will of my Father in heaven is my brother and sister and mother.” I don’t know about the rest of you, but that would have hurt my feelings…just a little.

There is no doubt that Jesus loved his family and his family loved him.  Even after all his disciples abandoned him, it was his mother who stayed at the foot of the cross.  According to the Gospel of John, one of his last acts was to make sure that his mother was cared for after he died.  Jesus did not hate his family.  What he hated was the fact that so many people put other things or people above God.  Usually when we critique things that distract us from God, we mention things like wealth and success.  Yet, anything, even good things can get in the way of God.  Any time we put something, or someone over God, we are making a compromise in our lives as disciples.

One of the books of that Bonhoeffer is best known for is the Cost of Discipleship.  In the book he argues vehemently against the idea of cheap grace.  He wrote, “Cheap grace is the preaching of forgiveness without requiring repentance, baptism without the discipline of the community, it is the Lord’s Supper without confession of sin…. Cheap grace is grace without discipleship, grace without the cross…”**    Bonhoeffer had seen all too clearly what happened to a church that chose safety and convenience over the sacrificial discipleship that Christ calls us to.

For most of his life, Bonhoeffer was a confirmed bachelor, with no intent on marrying.  But he fell in love. During his two years in prison he and his fiancée Maria corresponded regularly.  She urged him to free himself to write emotionally and during that time some of his views softened a little and he went from writing theology to love poems.  Two days before his concentration camp was liberated he was hung.  When the liberators came, they buried or burned all the bodies because there were too many to identify.  Maria wandered Germany for months looking for him because she did not know he had died.  His parents learned of his death when they heard his memorial service on the radio.  His brother and two brothers in law were all killed at different concentration camps within days of each other.  Bonhoeffer loved his family and his family loved him. But in the end, he chose discipleship over them. That is what Jesus meant in our Gospel for today.

Most of us, probably none of us, will have to pay that kind of cost for discipleship.  But we are still called to make sacrifices.   In our Gospel reading, Jesus is telling his followers and all of us that there is nothing easy about the Christian life.  It’s not meant to be easy.  But if you think about your life, I think we often find that some of our most rewarding experiences have been the result of hard work and sacrifices. There will be times when we fall short and can’t make the sacrifices that are required. We can’t all be Dietrich Bonhoeffer.  We definitely can’t be Jesus.  But we can try to follow their example.  When we have an opportunity to choose between what is easy and what is right, we can choose to do the right thing.  We can choose God over convenience.   We can do that because we know that God’s love has already been poured out on us and there is nothing cheap about that.